It might only be 60 miles from end to end but the coastline of the Yellowhammer State sure can draw some sighs. Just like its Floridian neighbors, it’s all pearly white powder and azure Gulf waters. Throw in a few barrier isles with wide, breezy bays, and happening resort towns with buzzy summertime vibes. Then, 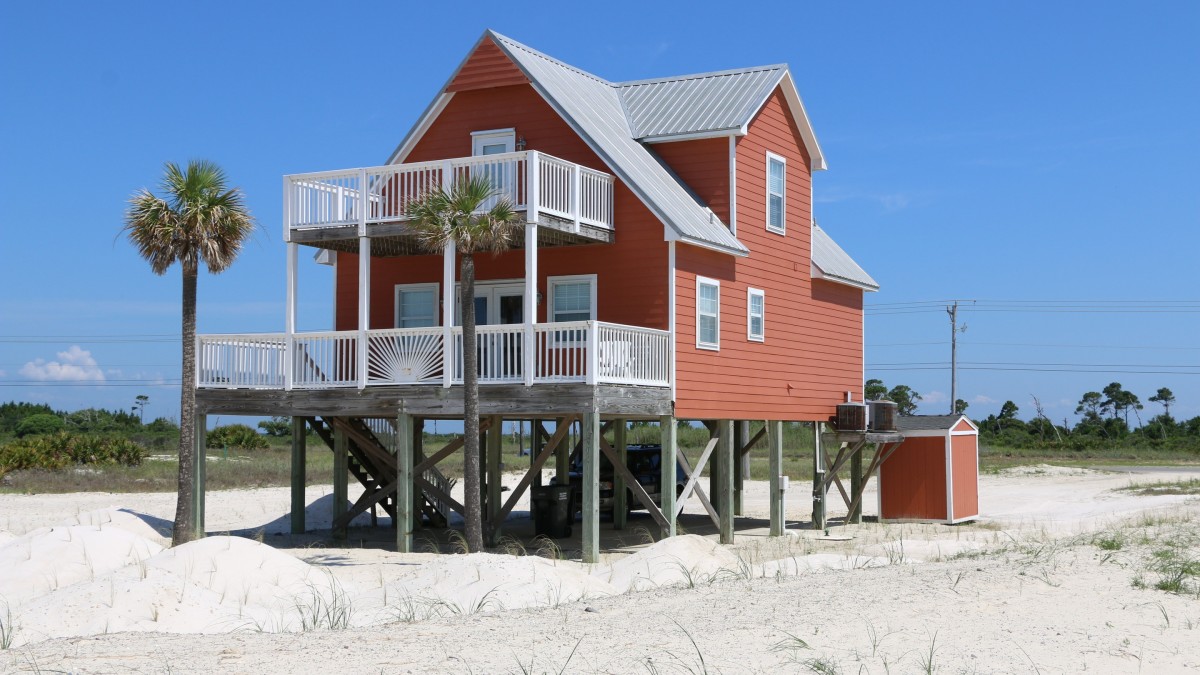 It might only be 60 miles from end to end but the coastline of the Yellowhammer State sure can draw some sighs. Just like its Floridian neighbors, it’s all pearly white powder and azure Gulf waters. Throw in a few barrier isles with wide, breezy bays, and happening resort towns with buzzy summertime vibes. Then, top it off with Fort Morgan beach rentals and all sorts of amazing Alabama beach rentals across the shoreline. It’s a doozy of a sun, sea, and sand getaway if you ask us.

Dashing along at the bottom of big Mobile Bay, the remote and untouched peninsula that hosts Fort Morgan is a feast for the eyes. It’s got green-blue-grey waters that roll in light waves against beach parks filled with patches of sea oats and sand dunes. A huge section of the area is covered by the Bon Secour National Wildlife Refuge, but push beyond that mass of scrub marshes and salt flats – keeping an eye out for sea turtles as you go – and you’ll get beautiful bungalows and other family-sized Fort Morgan rentals right on the beachfront.

Gregarious Gulf Shores is the most famous and popular spot on the Alabama coast. As Alabama beach rentals go, it’s got the whole shebang. There are condos. There are villas. There are wood-faced shacks sprayed by the salt. It’s also thrumming with excitement during the summer months. As soon as Memorial Day’s done for the year, crowds sun themselves on the public beach park, there are little ones petting alien-like reptiles in the Alabama Gulf Coast Zoo, and the crazy golf rounds are brimming with frustrated putters. A good time is had by all.

Ask any Alabama local about their favorite state beaches and Orange Beach is sure to be mentioned. It’s one of the first spots you reach as you hop over the state line from Florida, so it retains the Panhandle’s iconic cotton-tinted powder and turquoise shore waters. There’s also a hubbub about the place that shows it aspires just a little to the heights of PCB. You can mosey down to the shops of the Wharf for retail days. You can bring the kids to magma-spouting volcanos in Adventure Island. Or, you could just enjoy the bounty of the coast – there are oodles of Alabama beach vacation rentals here that sit just steps back over the dunes.

The untouched beauty of Dauphin Island

Out on its own, a little wisp of a barrier island washed by the Gulf of Mexico, Dauphin is a stunning little exclave of the Yellowhammer State. You can hop across on the Alabama Coastal Connection causeway – there’s often a nominal fee for access during the busier times of the year. And then it’s all about leaving footprints in the sugary sands of Public Beach, or heading off to see rare fliers amid the misty swamps and boardwalks of Audubon Bird Sanctuary.

Find something different in Fairhope

Tucked into the recesses of Mobile Bay, where the water glistens like a mirror against the blue Southern ski, Fairhope is a town first and foremost. Thankfully, it’s also blessed with its own urban beach park, which spreads either side of a traditional timber fishing pier. It’s not roaring ocean and frothing swells up here, but rather banks strewn with moss-topped live oaks and blooming azalea beds. What’s more, the vacation rentals are within striking distance of Mobile’s colonial forts and formidable WWII battleship exhibits.

Run away to Romar Beach

Backed by wetland parks and little ponds along the courses of Alabama’s Coastal Connection, Romar Beach sits neatly midway between Orange Beach and Gulf Shores. It’s not as bustling or as boisterous as its nearby neighbors, which means you can often find an Alabama beach rental close to the waves that’s both peaceful and out of the way. Just be sure to book early – there’s not an overload of homes in these parts because the whole shoreline is a tad less developed.